When we woke up at 6:45 am, we had already pulled into Vancouver, British Columbia. The final onboard account bill was delivered at 5 am and it was now correct. After having one last breakfast in buffet, we meet for our ship-sponsored Vancouver Overview tour at 8:20 am. Even though we usually try to avoid ship-sponsored excursions, this tour was the most convenient for us because our flight home departed at 2:30 pm and this tour would drop us off at the airport at the end.

After we disembarked, we went to the luggage claim area to get our luggage and we were missing one suitcase. Chris scoured the entire terminal looking for our suitcase, which is easy to spot because it’s orange, and couldn’t find it. After everyone with our color luggage tags got their suitcases, there was one left that was red and the same size as ours. We figured that the owner of this red suitcase must have taken our luggage by mistake because their luggage tag said 2 of 2 and obviously 1 of 2 was already claimed. We talked to the Princess and terminal staff. They tried to locate our suitcase but couldn’t so we filled out the lost luggage form. We were pretty sure that the owner of the red suitcase had ours and since everyone with Navy luggage tags were on our tour, we were pretty sure that our suitcase was on another bus for the same tour. If they didn’t find our luggage, the owner of the red suitcase just might check ours in at the airport and off to Arizona!! We informed the terminal and Horizon tour staff of the other person’s name and what we thought happened but there was nothing else we could do but start our tour and try not to worry about it.

During the tour, dispatch contacted our driver and said they located the bus that the red suitcase owner was on. The other bus driver would try to meet up with our bus since we were both stopping at Stanley Park. At the park, the other bus driver found us and opened up the first luggage compartment door on his bus. There was our orange suitcase!! What a relief! How someone can mistake an orange suitcase for a red one is beyond me. (Don’t want to stereotype but when Chris called the phone number on the luggage tag, he said the voicemail was of an elderly woman.) I’m glad I didn’t meet this person face to face or I would have had some choice words for them. Please, for the love of God, make sure you triple check that you are taking your own luggage and not someone else’s!! There are signs all over the terminal that ask you to make sure but people obviously ignore them. Anyway, I would have been majorly pissed if this lady took my ulus with her back to Arizona and I’d call her every day until she sent my suitcase back! I’m glad everything worked out.

On the tour itself…The Vancouver Overview tour began at 9:30 am. We saw Financial District, Chinatown, Gastown, Yaletown, and stopped at the totems at Stanley Park for 20 minutes. They dropped us off at the airport at 12 pm. It was a good tour for the short timeframe. The tour guide was very informative and knowledgeable but sometimes I felt like it was a bit too much information. For example, while driving through an intersection, “If you turned right here and walked 3 blocks, there is an excellent Italian restaurant”. Uhhh…first of all, we can’t see it because we’re driving and it isn’t exactly a key landmark so why bother mentioning it? Plus, everyone is being dropped off at the airport so we’re all flying out today. When would we eat at this excellent Italian restaurant?? He was very good in sharing history about important landmarks and sights though. I guess too much information is better than not enough. I would have also rather spent more time in Stanley Park or made an additional stop in Gastown or Chinatown than just driving through some of the districts but I understand we had to be at the airport by noon. Overall, I’m still glad I got to see a little of Vancouver before leaving. I especially enjoyed Stanley Park and the totems. They were pretty neat! 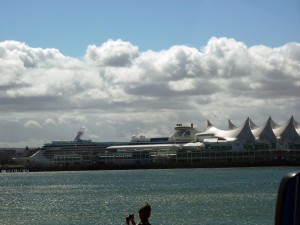 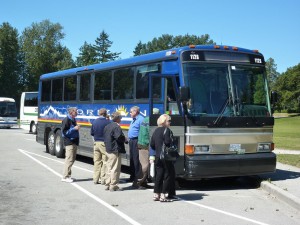 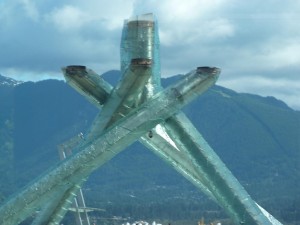 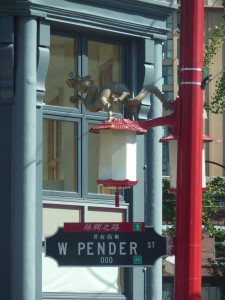 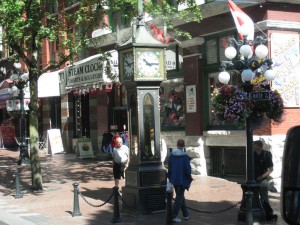 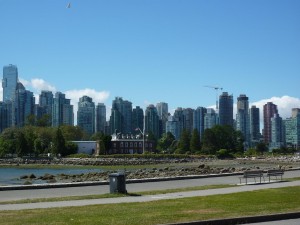 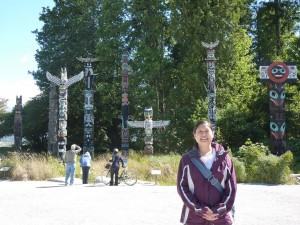 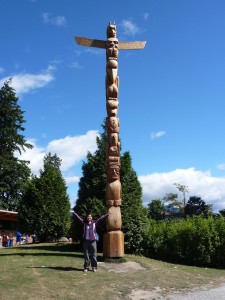 This Totem Pole gives perspective on how tall they really are 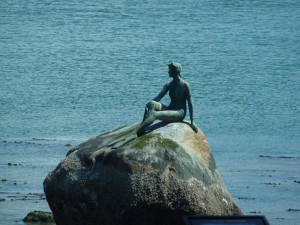 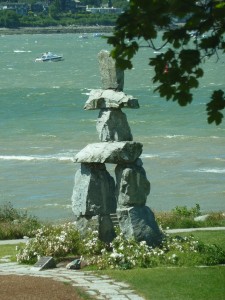 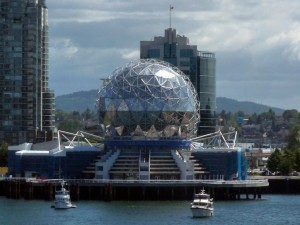 Check-in and security at the Vancouver Airport was a breeze. We grabbed lunch at one of the quick service restaurants in our terminal. Our flight was delayed by 20 minutes so we also had time to buy some souvenirs, including maple syrup, maple cream cookies, and lobster pate.

Read my final thoughts on our Island Princess Alaska Cruise.