This was the only day that we packed sandwiches from the breakfast buffet at Aloha Cafe because we expected that we would be in Hawaii Volcanoes National Park during lunch time and they don’t sell food. In addition to packing sandwiches, we brought a half-full stack of chips that we had bought on our flight to Hawaii and 2 cans of Coke that we bought at Walmart in Honolulu. We filled 2 ziploc bags with ice and used them along with a soft-sided cooler to keep the sandwiches and drinks cool. Beware that the ziploc bags WILL leak when the ice melts and our soft-sided cooler was not waterproof. Luckily, we put everything into a Waterproof Wine Bag so the melted water didn’t get everywhere.

We got off the ship at 8:15 am this morning. As reported, Alika’s Hawaiian Flowers has a stand at the cruise terminal where you can order beautiful flower arrangements and they will deliver them to your cabin. Actually, I’m pretty sure Maui, Hilo, and Kauai all had a couple of vendors selling souvenirs and jewelry in the cruise terminal. We took the shuttle to Thrifty and picked up our rental car. We were off the lot before 9 am. 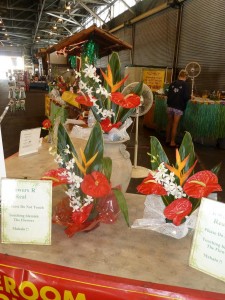 Upon entering the park, turn right on Crater Rim Drive.

9:40 am – Kilauea Visitor Center (right): We asked the rangers where lava was flowing but it was only reachable a very long hike and you would only see a small amount. There were some exhibits about the volcanoes, a gift shop, and the largest set of restrooms in the park. Open 7:45 am-5 pm daily. Something we found especially neat is that you can bring your own water bottle and refill it with rainwater “captured from the clouds, filtered by sand, and pumped by solar” for free. If you didn’t bring your own bottle, you can buy one from the gift shop. 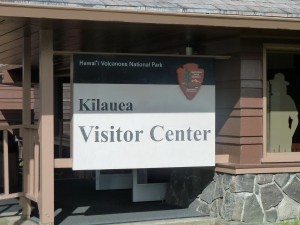 10 am – Caldera Overlook (from Visitors Center, walk across the street and past Volcano House to the short trail to overlook): Since Volcano House is temporarily closed, I don’t think many people know about this overlook so it was the least crowded. There was only 1 other couple who came by while we were there. It offers a great view of Kilauea Caldera and the steaming Halema’uma’u Crater.

Sulfur Banks: According to “Big Island Revealed”, there should have been a road on the right but we were unable to find it. The park map shows a hiking trail there, not a road, and when we drove by the trail, there are no places to park the car at the beginning or end of the trail so basically, we would have had to park at the Volcano Art Center and walk the rest of the way. Not in our plans so we skipped this. 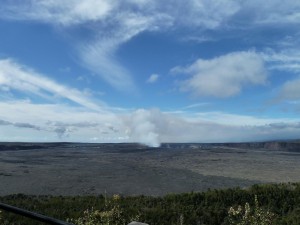 10:20 am – Steam Vents (left): This is where you can see the steam rising from cracks in the ground up close! Make sure you venture away from the parking lot, which only has a man-made steam hole. If you walk a little further, you’ll see steam coming from natural outlets as well as a view of Kilauea Crater. 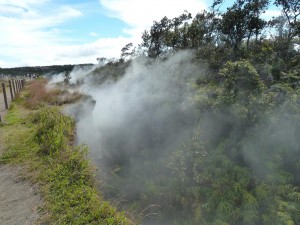 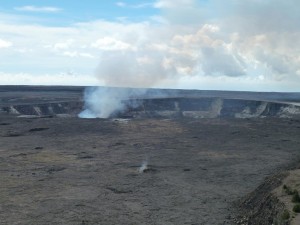 10:48 am – Jaggar Museum (left): Walk around to the back of the museum to get the best view of Halema’uma’u Crater since the road to the Halema’uma’u Outlook is closed. On a clear day, you might see Mauna Loa, 20 miles to the west. The museum shows a film from when the volcano was really spewing, explains the Madam Pele legend in murals, and monitors earthquakes (a precursor of eruptions) on a seismograph. You can also see displays of different types of lava and the clothes and tools of a man who was caught in an eruption. Since all the tour buses stop here, it can get crowded. Tours limit the amount of time they can stay in one place so if you can’t get good photos, wait about 10 minutes for the tour bus passengers to leave. Restrooms and another rainwater refilling station available. Open 8:30am-5pm. 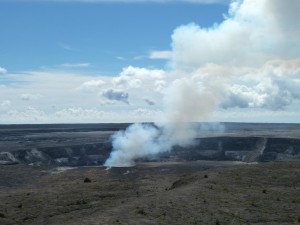 Halema’uma’u Crater from the Jaggar Museum 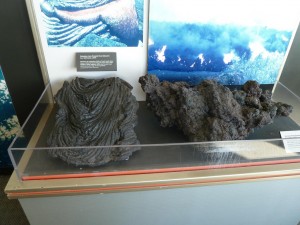 Lava rocks in the Jaggar Museum

11:18 am – Kilauea Iki Overlook (right): View of Kilauea Iki Crater. It is not steaming like Halema’uma’u Crater but you can see the texture and colors of the hardened lava.

We attempted to stop at Thurston Lava Tube but the parking lot was completely full, even all of the tour bus spots, and overrun by people. We decided to come back after finishing the rest of the park. 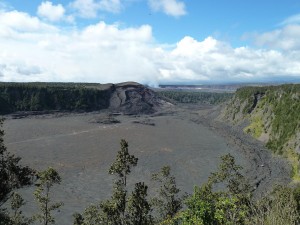 11:40 am – Pu’u Pua’i Overlook & Devastation Trail (road on left): Chris was hungry by now and there was a picnic table here under shade so we decided to eat our packed lunches. The weather was perfect for a picnic and it turned out to be a really nice, relaxing lunch. Just past the parking lot, there is an overlook of Kilauea Iki Crater. There is a path that leads to Devastation Trail, which shows results of 1959 eruption on the environment and you can see the base of Pu’u Pua’i. The entire trail is 0.5 miles but we only walked down it for about 5 minutes and was able to see the contract between the pre-eruption forest and then barren dirt. 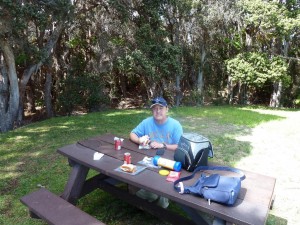 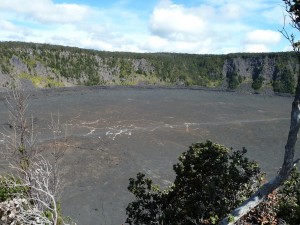 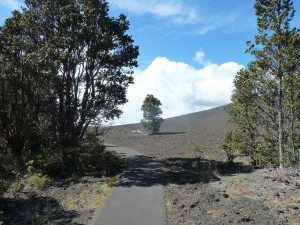 Devastation Trail: Trees turning into nothing along the trail 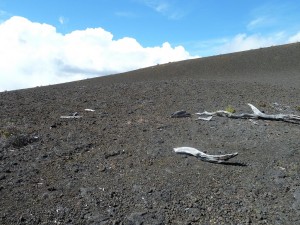 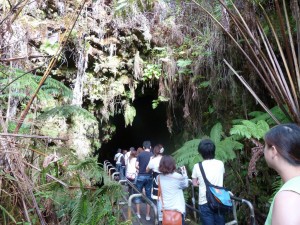 Descending into the lava tube 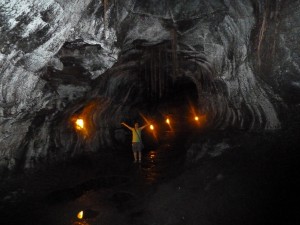 The unlighted portion of the tube begins where the lighted tube ends and past a gate that labels the unlit tube. You must have flashlights to go into the unlit tube because it is literally complete darkness in it. There are also many chances for you to hit your head if you don’t duck in time and near the end, you need to crawl. There was also a short drop and big boulders to navigate. It was fun because we only saw 2-3 small groups of people so most of the time, we could not see any other flashlights and it felt like we were there by ourselves! It can be dangerous if you are not careful. It took us about 15 minutes to reach the end of the tube. I’m scared of the dark so making it to the end was a huge accomplishment for me! Since we knew what to expect, it took 10 minutes on the way back out. I highly recommend bringing real flashlights, not mini-ones, or at least bring strong ones. We brought small travel flashlights to save space in our luggage and they were much too dim in the lava tube. 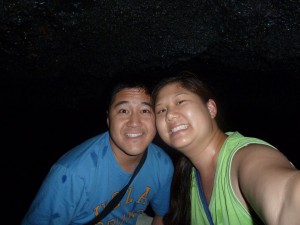 Hawaii Volcanoes National Park was truly one of the highlights of this entire trip. Seeing the massive craters, Devastation Trail, the lava tube, and the lava fields along Chain of Craters Road really hit home to me as to how awe-inspiring and devastating Mother Nature can be. While we didn’t get to see active lava at the park, the steam constantly rising from Halema’uma’u Crater and the Steam Vents reminds us that the volcano has its own will and is just waiting for her next show. Though visiting Volcano National Park took almost our entire day in Hilo, I’m very glad we did everything we did and made the park the focus of this day.

When we pulled into Hilo, I made a last minute decision to stop by Rainbow Falls before returning the car. It was my goal to return the car by 4:30 pm and we were cutting it close but I thought we would have time. On the way to Rainbow Falls, we hit some traffic so I was pretty stressed about timing. the whole way there. We finally arrived just after 4 pm and we would have to make this a quick stop.

Despite not seeing a rainbow there (which is more likely in the morning), Rainbow Falls was very beautiful and I’m glad we were able to squeeze it in but honestly, with the waterfalls we saw in Kauai later, it wouldn’t have been a big disappointment to have missed coming here. There was a woman selling bowls and headbands made of ti leaves. I winded up buying a cute little ti leaf fish! Overall, we were at Rainbow Falls for less than 10 minutes.

We filled up the rental car with gas and returned the car to Thrifty before 4:30 pm and was back at the cruise pier by 4:50 pm, plenty of time to spare since all aboard time was 5:30 pm! Yay!

Back onboard, Chris went back to the room and I headed straight to the Diamond Head Auditorium for the Orchid Lei Class that started at 4:45 pm. I was late but they still had enough orchids for me to make a lei. A nice lady I sat next to caught me up to speed and I made my beautiful lei! I noticed that others had some special flowers and their leis were fuller than mine but that’s what I get for coming late. I loved my lei just the same and took lots of photos with it on that evening. It’s fun to look at those photos and know that I actually made the lei I’m wearing in them!

We tried to have dinner as early as we could this evening so that we could come back to the room and shower before the Kilauea Volcano Sailby at 9:45 pm. We had a starboard balcony so we watched it from our balcony. The ship had a drink special that night where if you ordered a drink for the sail by to be delivered to your room, they would not charge you additional gratuity on the drink. I ordered a lava flow and honestly was not a fan. I don’t like artificial strawberry flavoring and that’s what they poured all over the drink. I’m going to stick to pina coladas in the future!

We started to see lava shortly after 9:45 pm, though the minutes seemed like forever as they passed waiting for us to see SOMETHING! We didn’t get a TON of action but there was a small glowing ball of lava that looked like it was the size of a gumball when viewing from the ship with the naked eye. It was very beautiful and exciting to see! We used 8×40 Bushnell binoculars for the viewing and through them, you can see actually see the small ball of lava flowing. With the binoculars, we could also see a couple of faint red glowing spots on the volcano that we couldn’t really see with our eyes. I read a tip on Cruise Critic to look up at the stars when the ship turns out all of its lights. I’m so glad I did this. As she said, it was the most stars I’ve ever seen in my life. Very magical. The next day, we went to the Photo Shop to ask about the professionally taken sail by photos and they told us even their camera couldn’t get any good shots of it! That was disappointing so I’m glad we took some photos of the sail by on our own, even if it just looks like a little red dot. LOL! 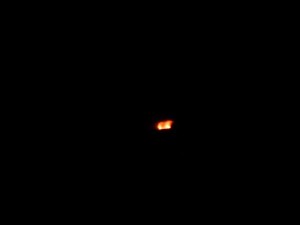